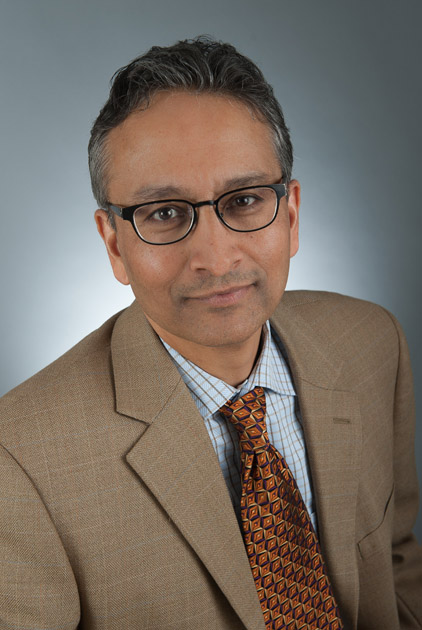 Anil K. Lalwani, M.D. earned his medical degree from the University of Michigan Medical School in 1985 and subsequently completed is internship in General and Thoracic Surgery at Duke University Medical Center and his residency in Otolaryngology-Head and Neck Surgery at UCSF. Following subspecialty training in Neurotology and Skull base surgery, he served as Senior Staff Fellow at the National Institute on Deafness and Other Communication Disorders, National Institute of Health. In 1994, he joined the faculty at UCSF as an assistant professor and rose to the rank of Professor in 2002. In April 2003, Dr. Lalwani was recruited to New York University School of Medicine to serve as Mendik Foundation Professor and Chairman of the Department of Otolaryngology—a position he held until December 2009. During his tenure, the previously unranked department rose to #22 on the US News and World Report survey and was #13 in research funding.

Dr. Lalwani’s basic research has previously focused on two key areas: identifying genes that are critical for hearing through the use of molecular genetic and molecular biologic methods, and developing and investigating gene transfer technology for the treatment of hearing disorders. More recently, his research endeavors include developing technology to navigate a cochlear implant electrode atraumatically into the cochlea, enhancing music enjoyment in cochlear implant recipients, designing microneedles for introducing stem cells through the round window membrane, defining the otomicrobiome, and studying the role of obesity and tobacco in childhood hearing loss.

Author of more than 180 peer-reviewed articles, and numerous book chapters, Dr. Lalwani serves on the editorial board of leading otolaryngology journals; he is the Section Editor of Triological Society Best Practice – a popular feature published in Laryngoscope. He has published numerous books including the textbook defining the subspecialty of Pediatric Otology and Neurotology. The 3rd edition of his highly successful second book, Current Diagnosis & Treatment in Otolaryngology - Head & Neck Surgery, has been translated into Spanish, Turkish, and Portuguese. The 4th edition of Recent Advances in Otolaryngology - Head and Neck Surgery, has just been published in January 2015.

Project Title: Enhancing Music Enjoyment with Cochlear Implantation The Cochlear Implant (CI) restores hearing to deafened individuals. Speech discrimination among the post-lingually deafened CI users usually exceeds 80%. Despite excellent performance on speech discrimination, enjoyment of music among CI listeners remains poor and has been attributed to decreased music perception. Music perception – the perception of pitch, melody, harmony, rhythm, and timbre – is greatly impaired in cochlear implantees. Contributing factors responsible for diminished music perception include low resolution and skewed mapping of transmitted frequencies through the CI to the auditory cortex, difficulty perceiving spectral components individually, and deficits with higher perceptual integration tasks such as auditory stream segregation. Limitations of cochlear implant hardware, sound processing software, and auditory nerve degeneration all may play a role in signal degradation. Due to these factors, complex music signals are poorly perceived and consequently poorly enjoyed by CI listeners. The goal of our research is to enhance music enjoyment among cochlear implantees by investigating the features of music that affect its perception and enjoyment. These features include different aspects of music such as reverberation, rhythm, instrument, and overtones, among others. Our hypothesis supported by early studies is that musical enjoyment with cochlear implants is influenced by the complexity of the original music. Thus, re-engineering music to reduce the complexity of music has the potential to make listening more enjoyable for a listener with cochlear implant. We have brought together a cadre of passionate individuals including cochlear implant surgeons, cochlear implant audiologists, music engineers, composers, and imaging specialists to form the Cochlear Implant Engineering Group (CIMEG) to make music enjoyment a reality for cochlear implantees.

Find an ENT Doctor by: